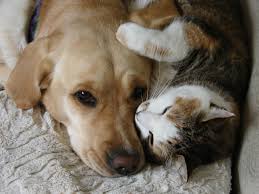 The writer James Dickey, best known for his novel Deliverance, was in fact more prolific as a poet; lately I’ve recalled his verses from “The Heaven of Animals,” a reflection on where beasts might go when they die.  Over our seventy- or eighty-year human lives, we can probably all recollect the non-human friends and acquaintances who passed their shorter spans with us.

I grew up with dogs and cats.  There was Scout, the Weimaraner-Pointer who ran outside at every opportunity; Granny, black and white and always having kittens; then little fluffy Lynn, lost after only a year, her place taken by the Calico Spitfire, my confidant all through adolescence.  She had her litter in my closet, and I named them for airplanes too, Zero, Mustang, Thunderbolt, Hurricane.  Meanwhile we had the canines Brownie, Scout’s hyperactive successor, and a black Lab, Raz (Rasputin), whom we somehow inherited.  Raz and Spitfire grew old together.  Brownie got sick and died before the vet could do anything.

Of course relatives’ pets became as familiar as the relatives themselves.  Cleo, the imperious feline of my aunt and uncle and cousins; Mukwa, an ursine dog belonging to relations in northern Ontario (“Mukwa” is Ojibway for bear) – I was always glad to see them when we visited every summer.

As a young man I was too transient, among other failings, to own an animal, but I grew close to those of my buddies:  Pal, an aging St. Bernard mix who watched over us with our guitars and Frisbees; Yang, the calm enigmatic cat who hung out with us in a smoky apartment; Jack, my housemate’s tom who wandered outside one day and never came back; Brio, a Boxer who drank beer from a bowl and howled along to Side One of Led Zeppelin; Scratchy, a cheerful budgie who swooped around his living room and picked food from his person’s teeth, to everyone’s amusement.

When I settled down, my spouse had a fish named Iris, and then we gradually acquired a trio of cats:  Max, an amiable bicolor, Prissy, the Himalayan I cuddled and sang to; Varmint, full of mischief and joy.  Then Varmint had a recurring infection – I gently stroked him and told him he was a good little fellow after all, as the vet put the final syringe into his forearm.  Prissy slowed down and then was stressed by the new baby – she went off to sleep in my laundry basket and did not wake up, dying among the comforting scents of the one who had always held her closest.  Max survived the cross-Canada migration alone with me in the car, and lived for another few years – one night he waited until we had put the children to bed, and slowly slipped away as we said goodbye.  We buried him in the back yard the next day.

Now there is Sunny, who loves her people, meowing for breakfast in the mornings and snuggling on any stationary lap where we read or text or scroll. Just recently the Betta fish Poseidon stopped swimming out from his underwater pagoda.  We had him for most of his two years’ existence, and now he too sleeps beneath another back yard, memorialized with a little note written by the young human whose bedroom had been his universe.  All the others are gone as well, along with Marty, Sugarmint, Tiger, Tigger, Pepper, Ginger, Dude, Julia, Peggy, and so many besides.  I don’t know if I’ll make it to the paradise of humanity – if there is one, or if they’ll take me when I arrive – but I’m sure all my feline, canine, aquatic and avian companions are enjoying a well-earned eternity in the Heaven of animals.

Here they are.  The soft eyes open.

If they have lived in a wood

If they have lived on plains

It is grass rolling

Under their feet forever.

Having no souls, they have come,

Anyway, beyond their knowing.