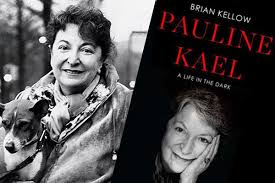 Pauline Kael (1919-2001) was the most influential US film critic during what is now recognized as American cinema’s most innovative years – the era that saw the releases of Bonnie and Clyde, The Graduate, M*A*S*H, Easy Rider, The Godfather, Straw Dogs, Chinatown, Taxi Driver, Annie Hall, and many other pictures today considered classics. Author Brian Kellow’s 2011 biography of Kael, A Life in the Dark, is a well-researched and reflective examination of her life and career, but it doesn’t quite come to grips with the way Kael may have been unwittingly complicit in the artistic demise of Hollywood itself.

Kael was a smart, feisty critic with a strong background in literature as well as the postwar European film renaissance (she’d worked as a programmer at a San Francisco art-house theater) who, once she landed the prestigious job of the New Yorker magazine’s resident film writer in 1967, soon established herself as the most daunting and daring connoisseur of the medium in print.  This was a time when reviewers in numerous journals routinely feuded with each other over rarefied aesthetic judgements – Kael and The Village Voice‘s Andrew Sarris nursed a longstanding grudge around the auteur theory – while a wide, knowledgeable readership was delighted to take sides.  It was an exciting time to be a filmmaker, and a filmgoer.

What set Kael apart was her tone.  In contrast to critics like the quietly perceptive Stanley Kauffmann or the insufferably snooty John Simon, she wrote with a first-person enthusiasm – her pieces were full of slang, contractions, and emphatic italics – that was new in her field, and which sometimes alarmed her staid New Yorker editor William Shawn.  At the same time she maintained a highbrow discrimination, never stooping to the gee-whiz vacuity of the “movie buffs” exemplified by Leonard Maltin.  She loved Last Tango In Paris, and the complex, sometimes confused works of Robert Altman, Sam Peckinpah, and early Brian De Palma, while remaining unimpressed with Star Wars and Raiders of the Lost Ark, the comic-book blockbusters whose success portended the coming reign of the high concept.

Yet Kael’s chatty style, meant to convey the immediate thrill of seeing a new film for the first time, seemed to endorse the same sensibility catered to by the studios as they looked for the biggest, least discerning audiences.  She was not afraid to praise shallow pictures if they stirred a deeper response:  “I don’t trust any of the tastes of people who were born with such good taste that they didn’t need to find their way through trash,” she wrote in a 1969 Harper’s essay.  This willingness to reject (if only selectively) the refined standards of her more scholarly contemporaries encouraged other cineastes to abandon themselves to sheer emotional reaction, and Kael also established the pseudo-conversational prose effects aped by every second- through fourth-rate movie critic who came after her – “You can’t help but notice…,” “We’re mesmerized by…,” “You wonder if…”, et cetera.  Highly competitive and often tactless with her professional colleagues, as well, Kellow suggests that “Pauline had a bit of a Magellan complex:  It was easiest for her to give approval when she was discovering a film or director before other critics had.”  The result was that her pet Altmans and Peckinpahs became too obscure or self-indulgent for their commercial good, whereas viewers could trust their enjoyment of the Spielbergs and Lucases because Kael had already articulated the giddiness they inspired.

Doubtless, Pauline Kael was not directly to blame for the decline of the industry as such, which had more to do with the financial debacles of Coppola’s Apocalypse Now and Cimino’s Heaven’s Gate, and the studios’ consequent turn to empty, impersonal franchises, than her own critical predilections.  She was an intelligent advocate for American film in American film’s peak creative years, and Kellow’s book is an affectionate reminder of how seriously the craft was then regarded by its curators.  Yet the impact of her writing on a generation ultimately trivialized the very art form on whose importance she insisted, week after week. Kael used language to celebrate an increasingly post-literate culture (one of her books was called Kiss Kiss Bang Bang), and her celebrations succeeded all too well.  Pictures matter, she might have argued; but so, once, did words.