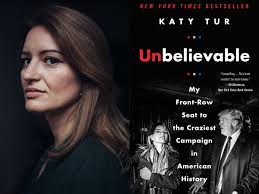 There is an esteemed tradition of political journalists authoring in-depth retrospectives of national election campaigns:  The Boys On the Bus, Game Change, The Making of the President, The Selling of the President, the recent Shattered, and of course the classic Gonzo diaries of Hunter S. Thompson.  These accounts serve to add a human dimension to the daily or hourly reports first filed while covering the candidates as the races progressed, fleshing out those initial stories of speeches, polls, debates, and gaffes with background portraits of politicians, party operatives, and press people working and travelling together in hotels, planes, roadside diners and rural town halls.  Though you know how the stories end – that is, who won the elections – it’s still illuminating to discover how the professionals on either side of the cameras and the microphones wanted the stories to be told.  But Katy Tur’s 2017 memoir, Unbelievable:  My Front-Row Seat to the Craziest Campaign in American History, mostly illuminates how the two professions have converged to tell the same story, one the whole world is now living with.

NBC reporter Tur was assigned the Donald Trump beat in 2015 and followed him as he went from joke candidate to national outrage to – disastrously – President of the United States.  There are many new books documenting Trump’s unlikely path to victory and its ominous meaning for America, but Tur’s firsthand experiences at interviews and rallies should have made for a uniquely compelling narrative.  She had early glimpses of Trump’s arrogance and bullying, and was even called out by him at a campaign event where she felt the simmering hostility of his supporters (Secret Service agents escorted her from the venue).  Yet Unbelievable‘s central character is not Donald Trump but Katy Tur.  In this she provides an inadvertent explanation of Trump’s rise that’s far more insightful than any observations she actually commits to air or print.

Unbelievable is written in a first-person, present tense voice meant to convey the excitement and pressure of a high-profile media career:  “I’m exhausted and cold and, at 5:30 AM, I’ve already been up for an hour.”  “No one is asking me to be on television tomorrow.  Not. A. Single. Show…I am practically giddy at the news…Tomorrow is my day.  Hell, I might even try yoga again.”  “It’s after midnight at Bern’s Steak House, a fancy but kitschy restaurant in Tampa…How many bottles have we had?  No one is sure…We’re closing the place down.”  She might be following an historic election battle; then again, she might be penning a sequel to Broadcast News.  Tur is presumably an intelligent and trained journalist (the book features an autobiographical chapter on her childhood and education), but her confessional, me-myself-and-I style reinforces the stereotype of the bubble-headed Barbie or Ken “on-air personality” who functions more as eye candy than serious correspondent.  A quick channel-surf will demonstrate the physical attractiveness of most anchors and reporters nowadays; whatever credentials Tur and her fellow talking heads were hired for, vanity must be a pretty common denominator.

More broadly, her descriptions of the network television business in full campaign mode – the frantic texting between producers and their telegenic stars, the hurried hair and makeup sessions just before the crucial live spot, the endless scrambling to be where competitors are going or already are – confirm how deeply politics and entertainment have merged, insofar as both journalists and their candidate subjects are equally performers, each questing not for hearts and minds, or the truth, but for an audience.  In Unbelievable, Tur casts herself as an ambitious, stressed-out player in a prestigious but stressful trade, who happens to be appalled by Trump’s growing popularity over the course of 2016.  She was just incidentally appalled, though, and more focused on the ambition and the stress and the prestige.  The Republican nominee and his constituency matter here as the background for the narrator’s personal and professional life, just as Trump’s loyalists are themselves no more than fodder for his egomania.  Unbelievable makes an unintentional case that the self-absorbed celebrity Donald Trump became president not despite but because of self-absorbed celebrity-watchers like Katy Tur.