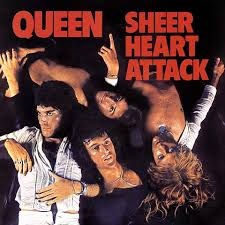 It’s rare for me to be excited about discovering and recommending music these days, but I’m pleased to spread the word about an album that has recently struck me as David Bowie and Pink Floyd together journeying to see Rush open for Deep Purple, while Tommy and Abbey Road play on their car stereo.  With that indescribable mix of poetic idiosyncrasy and expert craftsmanship which characterizes the best classic rock, its sequence of tracks range in form from high camp to heavy metal; I’ve heard few other artists with such an original repertoire and such a singular sound.  The name and author of this remarkable work?  Sheer Heart Attack by Queen, released in 1974.

Of course, Queen is a legendary act with millions of fans, and everybody in the civilized world knows “Bohemian Rhapsody” and “We Will Rock You / We Are the Champions.” Sheer Heart Attack has long been considered a great record from an era full of great records, but of its songs I only knew the radio staple “Killer Queen” and the hard-driving “Tenement Funster” and “Stone Cold Crazy.”  Checking out a copy of the album on (where else?) YouTube, I was delighted to take a musical ride through “Brighton Rock,” “Flick of the Wrist,” “Lily of the Valley” and “In the Lap of the Gods” as well as the more familiar cuts, all of which sound better when juxtaposed with each other.  Sheer Heart Attack really shows off the lost art of track sequencing – just as Born To Run, Led Zeppelin IV, and Exile on Main Street also do – whereby even lesser material complements the standout songs, and vice-versa.  This isn’t a greatest-hits compilation but an organic whole.  And, my God:  Mercury’s voice and piano, and Brian May’s guitar!  Musicians of that caliber aren’t making rock ‘n’ roll any more.

I’ve always maintained that “new music” is music that’s new to me, even when I was a young person.  Then, hearing Rubber Soul, Black Sabbath, or The Essential Jimi Hendrix for the first time were life-changing experiences, despite the albums already being fifteen or twenty years old; it was the same a while later, when I began to explore the canons of Chet Baker, Patsy Cline, and Ray Charles.  This outlook isn’t easy to maintain.  Immersed in commercial culture as we have all been for generations, we have come to think of entertainment as a kind of natural phenomena, changing at regular intervals like weather, rather than at the behest of giant industries.  Thus summers aren’t just times of sunshine and beaches, but of epic Hollywood movies; childhoods are defined not just by parents and playmates but by favorite TV characters; youth is remembered not only for our energy and innocence but for the pop stars put before us at that age.  Those products seemed to come with implied expiry dates, suggesting that they would only matter in the few months after their issue, after which some other show or fad would be there to take their place.  It requires some effort to see past that consumer mentality and appreciate a film or an artist that isn’t just the latest thing – to savor the thrill of finding out great talent for yourself, even if many others already found out about it decades ago.  I’m happy to report that Queen’s Sheer Heart Attack has thrilled me in just that fashion.  Next I’m finally going to check out that American singer who had all those hits in the 1950s, you know the guy I mean, what’s-his-name Presley.

Those with ears to hear, let them hear.

2 thoughts on “Queen For a Day”