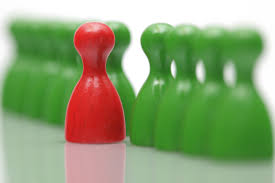 Over the past few years I’ve noticed that the word minority, used in a socio-political context, has increasingly been replaced by marginalized.   Whereas the earlier term implied a mere accident of demographics, more recent usage suggests active rejection: you might happen to be one of a numerical minority within a broader population, but you’ve been marginalized away from your rightful position within it.

The distinction is important.  Over decades, racial, linguistic, religious, and sexual minorities have demanded and won legal protection that guarantees them the same rights as those in dominant groups.  Previously, an individual’s security within his or her community rested on how many others belonged in the same sub-category; those without the numbers to back up their needs or wants were at the mercy of whoever surrounded them.  Discrimination, exploitation, and (in the worst cases) attempted extermination might result.  Reforms in the Twentieth Century finally granted a measure of assurance to peoples who were otherwise socially insignificant.  Ideally, thus, even in places where nearly everyone was (say) Anglophone, a Francophone could still get government services in French; where nearly everyone was Christian, a Jewish person could still freely worship without losing employment or educational opportunities; where nearly everyone was of European descent, an Asian could still count on access to impartial courts and secret ballots.

Common to all these gains, however, is that no one pretended being one of the few was exactly like being one of the many.  By all the important principles of citizenship, yes, you were necessarily the same – but in the little day-to-day exchanges, you might not always enjoy identical considerations. The concept of marginalization rejects this. Marginalization’s opponents insist that statistical minorities must be regarded as no less visible or valuable in the culture as anyone from a larger cohort, that it is wrong to notice the unconvention of the unconventional.  Transgender people, for example, may comprise only a tiny percentage of the Canadian population, but we must act as if they are fully the opposite half of the non-transgender segment.  Likewise, though only 1.6 million of Canada’s 35 million people are Native (according to the 2016 census, the latest for which such data is available), advocates claim that marginalization has reduced Natives’ deserved influence upon government, economy, and public discourse.   Similar arithmetical spins are now applied to a variety of other classes.

How persuasive is it to finesse the figures this way?  Could it be that, in some cases at least, the purportedly marginalized are just getting what their relative contributions warrant?  Women, to be sure, have a better case to make here.  Slightly more than half of all people in the world are female, but historically far fewer females have ever attained leadership positions in politics, business, and other fields.  Whether that’s a result of deliberate marginalization, though, is another issue.  Over the centuries, women have also been under-represented in military service, commission of violent crimes, and in mining and forestry fatalities, yet no one argues that such disproportionate ratios were only imposed by discriminatory laws.  Marginalization, and the appropriate response to it, is in the eye of the beholder.

In his 2012 book The Righteous Mind:  Why Good People Are Divided by Politics and Religion, Jonathan Haidt noted the seldom-observed difference between equality and fairness. Often used as synonyms, in fact fairness can generate inequality (an open election where mainstream parties win power and fringe candidates don’t), and equality can generate unfairness (hiring quotas which screen applicants through criteria besides ability). Marginalization, as an idea, aims to achieve equality at the expense of fairness. There must be no outsiders in democratic life, the idea holds, even if some kinds of insiders are far more common, and far more familiar to everyone else, than others. Good luck mandating that. Writing about the American Civil Liberties Union’s campaigns against public Nativity displays, a 1983 column by the anonymous New Republic essayist “TRB” put it well:

The battle for minority rights goes on, of course, but does final victory require eradication of the majority culture?   And is every manifestation of that culture an insult to those who aren’t fully a part of it?  People who want to go through life with nothing to remind them of their minority status ask too much.  They will not get it, and full civil equality does not require it.