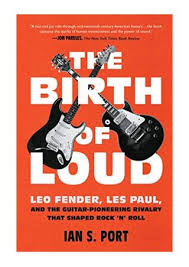 Whether in a blissful heaven or a dystopian Brave New World, visions of an ultimate carefree society often posit the citizens casually entertaining themselves with musical instruments.  Our present culture has, if anything, gone beyond such ideals, insofar as billions of people have access to infinite archives of entertainment made by others, all stored in the little metal rectangles to which they are now umbilically attached.  But an earlier stage in this evolution  (or decline) is well told by Ian S. Port in his 2019 book The Birth of Loud:  Leo Fender, Les Paul, and the Guitar-Pioneering Rivalry That Shaped Rock ‘n’ Roll.

As promised by the title, Port’s dual biography humanizes otherwise oft-told accounts of the electric guitar’s development and widespread commercial success.  Neither Leo Fender nor Les Paul were rock ‘n’ rollers:  Paul was a skilled jazz player, gig-hustling pro, and trailblazing innovator of studio technology, while Fender was a modest craftsman and entrepreneur with little affinity for show business, beyond a boffin’s interest in helping performers be better heard onstage.  And while both men deserve credit for particular advances in electronic musical equipment circa 1945, the product lines through which they became wealthy and renowned were at least as much the work of other designers, tinkerers, guitarists and salesmen they collaborated with, contracted to, or employed.  Les Paul did not “invent” the Gibson Les Paul, and nor did Leo Fender come up with every feature of the Telecaster, Stratocaster, or the Precision and Jazz electric basses.

Indeed, The Birth of Loud puts a welcome new light on how the electric guitar industry truly began to boom only with the second generation of rock artists from the early 1960s onward, several years after Teles, Strats, and Les Pauls first hit the market.  The Gibson model was actually a bit of a flop in its initial editions – 1958 or 1959 LPs can fetch six or even seven figures today – while Strats got a big boost from the Beach Boys and other surf rockers after 1962.  It was the Beatles’ breakthrough of 1964 that truly popularized the electric guitar, even though the Fabs used the American-made Fender and Gibson rivals of Rickenbackers and Gretsches, and a German-built Hofner bass (George Harrison was later seen with a Tele in Let It Be, a Les Paul on the “Revolution” TV clip, and a hand-painted psychedelic Strat in Magical Mystery Tour).  Eric Clapton’s virtuosity with John Mayall and then Cream revived the reputation of the Les Paul, which sounded sublime when plugged into an overdriven Marshall amplifier, while Jimi Hendrix demonstrated the full sonic potential of the Stratocaster, again through volumes higher than any predecessors had dared.  Leo Fender and Les Paul, middle-aged by 1970, had no idea what they’d wrought.

Hardcore guitar nerds might lament Port’s skimming of some schematic details, and I would like to have seen a few more paragraphs devoted to the backgrounds of Gibson’s Explorer and Flying V series (themselves failures in the 1950s but certified classics in later decades), yet the real strength here is as a social study.  The mass production and retailing of solid-body electric guitars in the Twentieth Century represented a further step in, essentially, the industrialization of pleasure:  the instruments were no longer the exclusive property of trained specialists but something any middle-class starstruck kid could get and fool around with.  As Port distils Fender’s mid-60s ad campaign, “You didn’t have to be an expert to play a Fender.  A Fender guitar wasn’t a professional tool, it was a leisure accessory.”

The legacy of this may be mixed.  We got a lot of great music, sure, but we also got a lot of acquisitive consumption by millions of people who weren’t dedicated musicians.  There are many beautiful and valuable guitars of the makes covered in The Birth of Loud which are today lying silent in wannabes’ closets and collectors’ display cases, instead of fulfilling the functions so lovingly intended by Leo Fender and Les Paul.  Still, the last time I played my Gibson RD through my Marshall in my garage, it was nice to have my performance complimented by my neighbor – not my next-door neighbor, mind you, but one from several houses down the street.  Over seventy years later, loud is live and well.