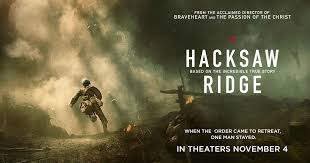 Over twenty years since Saving Private Ryan premiered, it’s clear that Steven Spielberg’s 1998 World War II epic established a new category of movies.  In Enemy At the Gates (2001), Windtalkers (2002), Flags of Our Fathers (2006), Fury (2014), the series Band of Brothers (2001) and The Pacific (2010), as well as Hacksaw Ridge (2016), Dunkirk (2017), and the recent World War I stories of 1917 (2019) and All Quiet On the Western Front (2022), the cinematic style and presentations of Twentieth Century battles are plainly descended from the Spielberg classic – but how well this influence serves the films or their audiences is less obvious.  You might describe the pictures of this special subgenre as revisionism, or reimagining, or reboots.  I’m inclined to call them war porn.

Take Hacksaw Ridge.  Covering the US assault on Okinawa in 1945, the true account of an Army medic who rescued numerous fellow soldiers while himself refusing to carry a gun is basically an excuse for director Mel Gibson to stage long, lavish sequences where countless Japanese and American bodies are destroyed in a variety of fashions: atomized by grenades, annihilated by machine guns, incinerated by flame throwers, and gored by bayonets.  The work of Gibson’s camera crews, editors, stunt men, sound recordists, weapons handlers, and especially his CGI programmers, is orchestrated for maximum sensory impact, just as in his 2002 Vietnam flick, We Were Soldiers.  Such nonstop carnage is presumably meant to convey “the way it really was,” but I wonder whether any two-hour movie can accurately represent the experience of armed combat, or for that matter of space flight, a shark attack, or sex, or anything that ever happens.  A couple of times my Netflix viewing of Hacksaw Ridge was paused in the middle of a bloody firefight while I made myself a late-night snack.

What made Saving Private Ryan a landmark film was the way Spielberg took the familiar material of Second World War action and recast it in the visual language of a much younger generation.  Rapid cutting; loud and steady sound effects; pseudo-newsreel cinematography; explicit images of wounds and bullet strikes; digitally enhanced details of explosive discharges and visceral spray – the old stories of D-Day, Panzer tanks, and paratroopers were made freshly powerful in an updated medium.  Yet those devices soon became formulaic until, by the time of Hacksaw Ridge and beyond, their use and overuse has become merely numbing.

Although admirers of this sort of filmmaking extol it as uniquely “realistic,” the same claim was probably made of Sands of Iwo Jima (1949), The Longest Day (1962), and A Bridge Too Far (1977).  Reality didn’t change between then and now, but moviegoers’ understanding of it did.  Every few decades, the means by which to dramatize human activity (e.g. warfare) advances, via the latest technologies and the latest public standards of taste.  Indeed, if you could bring a print of Windtalkers or 1917 back in time to 1950, when the events they portrayed were recent memories, spectators might find them unwatchable or even incomprehensible, less from their profanity or their violence as from their sheer auditory and optical overload – just as a contemporary teenager would be bored senseless by the black-and-white artifices of The Longest Day. Nowadays immersive video games like Call of Duty allow players to participate in historic clashes, where thousands of people died, from the comfort of their living room couch;  future virtual reality headsets might let us stroll through the Somme or Stalingrad in complete safety while still savoring the manufactured authenticity afforded by state-of-the-art holograms. Each innovation is said to have definitively captured some legendary battle, yet after a while each becomes insufficiently vivid for the sensibilities of its consumers. No wonder we keep finding new settings, like Syria or Iraq or Ukraine, on which to base our entertainments.  No wonder we see no irony in praising simulated slaughter as lifelike. No wonder artistic realism is ever in pursuit, and never quite in reach, of the real. As much as the directors strive to make Hacksaw Ridge or Dunkirk or All Quiet On the Western Front into ultimately truthful war pictures, there is one truth they omit utterly, as noted in this quotation (found in Purnell’s History of the Second World War) by a Technical Sergeant Donald Haguall, 48th Quartermaster Graves Registration, at the close of World War II:

Sure, there were lots of bodies we never identified…The ones that stink the worst are the guys who got internal wounds and are dead about three weeks with the blood staying inside and rotting, and when you move the body the blood comes out of the nose and mouth. Then some of them bloat up in the sun, they bloat up so big that they bust the buttons and then they get blue and the skin peels. They don’t all get blue, some of them get black. But they all stunk. There’s only one stink and that’s it. You never get used to it, either. As long as you live, you never get used to it. And after a while, the stink gets in your clothes and you can taste it in your mouth. You know what I think? I think maybe if every civilian in the world could smell this stink, then maybe we wouldn’t have any more wars.