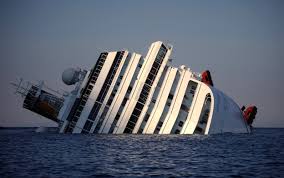 Spare a thought, if you can, for Captain Francesco Schettino, master of the ill-fated Italian cruise ship Costa Concordia when it ran aground and keeled over in 2012.  Schettino was recently found guilty of manslaughter for leaving the vessel during the accident, which left 32 passengers and crew members dead. Extensive news coverage of Schettino’s neglect of duty and subsequent trial earned him the nickname “Captain Coward”; nearly every casual news watcher around the world knows about the Italian mariner who abandoned ship when he wasn’t supposed to and who may now spend the rest of his life feeling ashamed about it.

We all like to think we’d behave honorably and bravely in a moment of crisis, yet human beings, among them Francesco Schettino, have an innate fight-or-flight reflex that can override our intellects.  A species that always chose self-sacrifice over self-preservation would not have been around this long; fear of fatality or injury, and an impulse to avoid them, is wired into us.  Whenever someone is lauded for performing a “heroic” deed, like saving somebody from a military enemy or a raging fire, the person often shrugs and says something like, “I was just doing what anyone else would’ve done…I’m no hero,” as if the act was not really the result of a conscious decision but a mere momentary instinct.  Yet that instinct works the other way – doesn’t it?  What about ducking the enemy or escaping the raging fire?  “I was just doing what anyone else would’ve done…I’m no coward.”

Apart from physical dangers, there are also moral or social risks we tend to avoid more than we care to admit.  I like to believe that, if I’d been a German citizen in 1938, I’d have courageously denounced Hitler and stood up to his Nazi thugs, but in reality I might more probably have done what millions of others did – gone along with the program and stayed out of trouble.  We don’t necessarily applaud whistleblowers and conscientious objectors for their causes but their conspicuousness; the majority, all those people who don’t blow whistles or conscientiously object, are assumed to be fearful conformists, whatever they’re conforming to.  I guess that’s everyone, at one time or another.  Rosa Parks is often hailed as a hero for refusing to give up her bus seat to a white person, but does that make cowards out of all the African-Americans who had duly got up and sat at the back?  If Rosa Parks was uniquely good, was everyone else collectively guilty?  Who wants to weigh in on that one?

It’s true that some people – soldiers, police, firemen – have been so trained to face hazards and so drilled to support their team that it’s easier for them, psychologically, to put life and limb on the line.  When a member of an elite rescue squad rushes into a burning building to save a buddy, it’s not the same as when an ordinary civilian rushes in to save a complete stranger.  And I know nothing about maritime law or the shipboard regulations that compel a captain to stay with his stricken boat until every last passenger and seaman is safely ashore; for all I know Francesco Schettino knowingly opted to commit a grievous personal and professional dereliction of responsibility that will weigh on him for the rest of his life.  But it may be that he acted on a pivotal second of irrational terror before contemplating the consequences that the rest of us, and Italian courts, have now judged.  It may be that he considered himself a perfectly calm and competent individual who would never run from peril should it arise, just as most of us do in our waking imaginations.  Until death and disaster stared him in the face, Captain Schettino likely had no idea whether he’d behave well or badly when the time came.  Neither do I.  Neither do you.

2 thoughts on “Fear and Loathing”