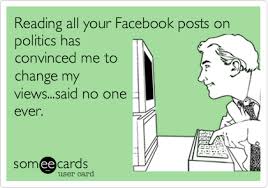 Years ago, the advent of the Internet was promised to usher in an unprecedented wave of democratization, and the promise has been fulfilled:  today billions of people have the freedom to denounce the powerful in our electronic agora, no matter how unimaginative, inflammatory, or inane their remarks may be.  Viva la revolucion!  This pervasive public shallowness – enabled by the immediacy and anonymity afforded to Facebookers, bloggers, commenters, and trolls – has long been a downside to the Information Age, but it has been especially apparent in these recent election seasons.

I am often struck, for example, by how closely the online invective of the anti-Barack Obama crowd in the US seems to mirror that from the anti-Stephen Harperites in Canada.  Both sides abundantly throw up corrosive diatribes which, directed at any private citizen, would qualify as libel, hate speech, or even criminal threat; both sides ascribe any social, economic, or cultural problem to the President or outgoing Prime Minister; both sides commonly expose shocking “evidence” lifted from their favorite networks or Web sites; both sides are overrepresented with bad spellers and pseudonymous creeps.

Here’s a sample of posts from the CBC News site, responding to a story about ex-PM Stephen Harper returning to live in his home city of Calgary, Alberta:

Scumbag harper is still sticking it to us….his ghost will haunt us for a long, long time it appears.

Prime Minister for 9 years. One of the worst ever. Wanted to be President until he realized he wasn’t living his dream in the Republican US.

Ah, the poor stunned buffoon can’t read the tea leaves. Don’t you get it harper, your not welcome anymore. Get out and stay out. You are a blight on Canadian society and no one wants to hear another word out of your lying mouth. Now get lost.

In a list of The 10 Worst Canadian PMs.
Steve-o would be at the top
The other 9 would also be Cons. No debate.

For contrast, here’s another sample of posts from the discussion threads of ledzeppelin.com, where guests weigh in on a variety of non-Zeppelin topics:

Libs have never let the Bill of Rights stand in their way in the past. [Obama] could issue a royal decree… I mean executive order, banning guns which would go to the Supreme Joke… I mean Court, and they would rule the Second Amendment…

I wonder when Obama is going to invite the family of the girl murdered by an illegal alien to white house?  Oh, I guess she wasn’t a black or a muslim so her life didn’t matter. Or how about all the white kids expelled from schools for wearing a t-shirt with an American flag?

As far as I’m concerned the father can return with them to whatever third world shit hole he came from. Obama’s an idiot for hitching his wagon to these parasites but it’s par for the course with him.

No matter your own positions on liberalism, conservatism, Stephen Harper or Barack Obama, you can’t say any of these are constructive or considered observations  These examples, note, come from politically neutral sites, appealing to readers of all stripes, so they probably aren’t as vicious as what you’d find in a really partisan forum.   No wonder legislatures like the US Congress become completely gridlocked – how can representatives work productively with people they’re sure are traitors and liars?

Note too that I’m not talking about professional pundits here.  It’s true there are plenty of loudmouth on-air commentators, newspaper columnists, and phone-in hosts who spout blatantly biased “analysis” and other rhetorical toxicities, but at least they are identifiable by their byline and at least they’re accountable, more or less, to editors, publishers, and producers.  It’s also true that an increasing number of news sites are screening their comments boards to publish only those who give their real names, the better to prevent the more obnoxious trolls.  Yet the proliferation of deeply hostile, paranoid, or obsessive online commenters is a worrisome phenomenon.  Where are these people coming from?  Are they engaged with their fellow citizens, or only a cyber-community of fellow haters? Do they read, study, learn, change their minds?  Do they vote?  If this is the democracy foretold by the techno-utopians of twenty years ago, I doubt anyone anticipated it would turn out to be so ugly.