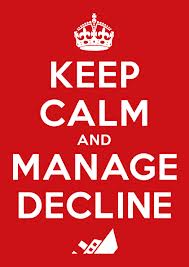 Economists and students of modern history concluded a while back that the Twentieth Century’s postwar boom of the 1950s to the late 1970s was an anomaly – the factors which combined for such a long stretch of prosperity and growth, in the West at least, will probably not recur in the lifetime of any adults living today.  Yet the slowdown has been gradual enough that many vestiges of the good times are still with us, alongside portents of the unsettled future. Historians of 2100, if there are any, may think of our era as the Great Transition, where the cultures of two distinct civilizations sat uneasily together.

Already, of course, there have been broad analyses about the conditions we are leaving behind.  A globalized economy means Canadian shoppers can now buy Chilean tangerines and South African grape juice in the depths of winter, but it also means Canadian loggers and steelworkers have their livelihoods threatened by competitors in Brazil and Indonesia. Mass obliteration by Soviet warheads doesn’t concern us anymore, but local destruction by Muslim extremists does.  Social scientists are lamenting the death (or debilitating illness) of the American Dream, in which each generation realistically expected to have a better income and a bigger house than the previous one.  Demographers see the aging and physical decline of the dominant population bloc of Baby Boomers, as well as an eclipse of the white majority in North America and Europe.  And tech mavens are bidding a long farewell to the shipping, retail, publishing, entertainment and broadcast industries as we have known them for decades.  The Great Transition, if that’s what it is, has been widely apprehended.

The effects of these changes in 2015 may not seem inexorable at first glance, until you look a little more closely.  Here I am, finally discovering that long-lost classic rock gem from 1971 which I’ve been seeking for ages – it’s posted on Youtube, along with several rarities from the same album.  Here you are, taking a nostalgic stroll past your old elementary school – on Google Street View.  Here are two old friends, reconnecting after years on opposite sides of the continent – via Facebook and Skype.  Here is a healthy sixty-five-year-old couple, spending some of the pension they earn from long careers at an auto plant to take a cross-country road trip in their RV – visiting their kids, who work part-time at Starbucks and who get around by public transit.  Here’s a nice three-bedroom house in a good neighborhood up for sale at an affordable price – in a small city whose main employer has just laid off most of its payroll.  Here’s a holiday family reunion where the great-grandparents are faithfully keeping up their traditions from Scotland, Italy, or Poland – while their great-grandchildren’s partners are patiently explaining how they do it differently in China, India, or Nigeria.  So much is reassuringly familiar, so much is dislocatingly different.

It may well be that similar dualities confounded people in 1946, 1919, or 1868:  the same sense that one world was irrevocably fading away while a transformative one was unstoppably approaching.  George Orwell’s novel Coming Up For Air looked back on the blissful complacency of England before World War I changed everything:

It’s quite true that if you look back on any special period of time you tend to remember the pleasant bits…But it’s also true that people then had something that we haven’t got now.  What?  It was simply that they didn’t think of the future as something to be terrified of…

For North Americans, at any rate, most experts would say the post-World War II years were measurably wealthier, with a measurably broader middle class and measurably more material security, than anything we’ve had since 1989. Change in itself isn’t a bad thing, but the wages, prices, and career mobility of now don’t compare well with those of, say, 1967.  Not every development is a decline, to be sure – pollution is down and tolerance is up, cigarettes are scorned but cannabis is accepted, there are bike lanes, recycling programs, and organic food – but for those of us in our forties there is still a feeling that the social certainties of our childhoods, like those recalled in Coming Up For Air, have gone forever. Anyway, Skype you at Starbucks.