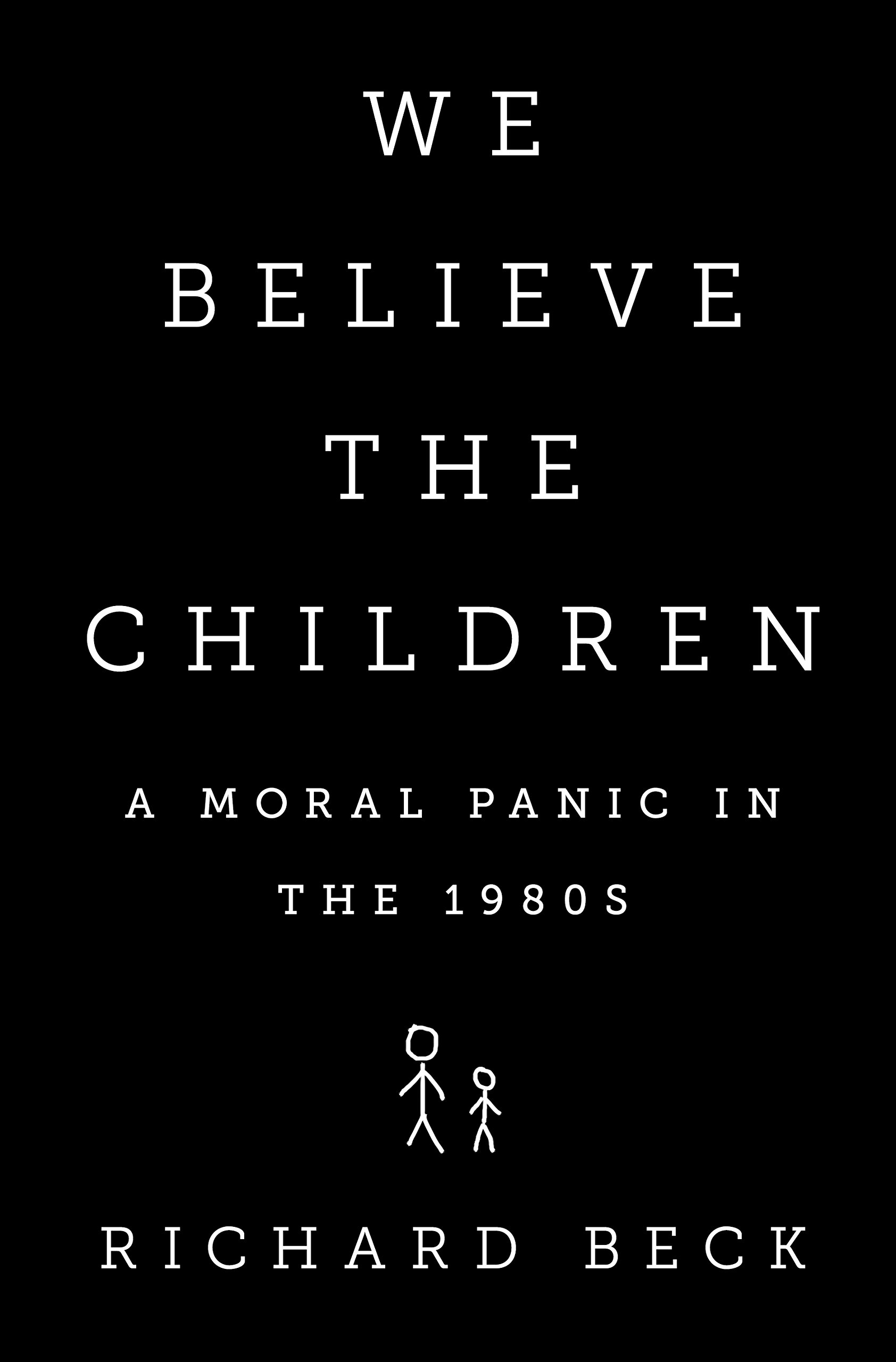 Richard Beck’s 2015 book, We Believe the Children:  A Moral Panic in the 1980s, should probably stand as the definitive history of the child abuse hysteria that swept America during the Reagan years.  In numerous cities across the nation, clandestine pedophile rings were claimed to be operating in local neighborhoods and day care centers, secretly subjecting preschoolers to unimaginably grotesque acts of sexual sadism.  Highly publicized arrests, trials, and convictions of family members, babysitters and caregivers took place in several jurisdictions, based on the allegations of tots as young as three years old.  Eventually, however, almost all the criminal charges were dropped, as parents, police, and prosecutors conceded the abuses had never happened.  We Believe The Children covers the chronology and background of these episodes thoroughly and conscientiously, but its conclusions are less certain.

Author Beck devotes much of his account to the infamous McMartin Preschool case, which began in 1983.  After one mother went to law enforcement with suspicions her son had been sexually molested by McMartin staff, an eruption of parental zealotry, forensic presumption, judicial overreach and media sensationalism combined for a “Satanic panic” in the US and other countries that lasted several years and cost tens of millions of dollars in public funds.  From McMartin, stories emerged of animal sacrifice and candlelit ceremonies conducted in hidden tunnels beneath the building, where kids were said to have been forced to drink blood and commit sexual acts, among numerous other accusations.  But the stories were entirely the product of suggestion, extracted by therapists practicing the dubious science of “recovered memory” and prompting children to confirm what adults had already concluded had taken place.  The saddest parts of We Believe the Children are Beck’s descriptions of small boys and girls trying desperately to please mothers, fathers, and clinicians by testifying to horrific scenes they knew to be imaginary but which somehow pleased their grownup interrogators.  “You’re just a scaredy cat,” one reluctant tyke was scolded by social worker Kee MacFarlane.  “How come you won’t tell me?”  The mother who made the initial McMartin complaint was finally diagnosed as a paranoid schizophrenic, well after the investigation and trial had taken its toll on supposed perpetrators and victims alike.

We Believe the Children offers a clear explanation of how a then-novel crusade for child welfare and a murk of neo-Freudian psychological theory together drove officials to find suppressed trauma where none existed, and Beck also cites the popular nonfiction books Sybil (1973) and Michelle Remembers (1980) for their role in spreading acceptance of Multiple Personality Disorder (MPD) and Satanic Ritual Abuse (SRA) as authentic phenomena.  He further argues that the day care scandals represented a conservative backlash on behalf of traditional family structures, in which fathers worked while mothers stayed at home to raise children, over the newer model of two busy parents dropping their kids off with professionals.  In this reading, the contemporaneous wave of incest survivor memoirs and self-publicizing MPD victims likewise reinforced the traditionalist ideal of helpless females unable to cope in a modern society that gave women too much sexual and career freedom.

Maybe.  Yet Beck only devotes a paragraph or two to the burgeoning pop-culture fascination with the occult which preceded the Satanic panic, and it’s worth pointing out that, despite hit films like The Godfather and Scarface, no one in the 1980s was accused of recruiting children into a mobster underworld, and despite turmoil in the Middle East, day cares were not suspected of being fronts for Islamic terrorists.  Rather, the emphasis on perversion, ritual killing, and cultism which characterized the scare drew on obvious sources in the mass entertainment of the mid-1960s onward.  As I’ve written in my book Here’s To My Sweet Satan:  How the Occult Haunted Music, Movies, and Pop Culture, 1966-1980,

For a culture accustomed to the bloody rampages of Charles Manson, the shameless perversities of Anton LaVey, and the no-holds-barred gross-outs of The Exorcist, such combinations of cruelty, vulgarity, and the occult [in the McMartin charges] were no longer surprising…For a long time the public had been bombarded with messages of what Satan and Satanists were like, of the words, images, and symbols associated with devil worship, and especially of how children were Satan’s favorite victims.  It had all finally proved too much for some people.

I believe it’s this influence that fostered the climate for McMartin and other travesties, at least as much as any right-wing fantasies about dutiful moms and dangerous outsiders.   Despite this oversight, however, We Believe The Children serves as a compelling and cautionary study of deluded beliefs, derailed justice, and destroyed lives.

4 thoughts on “Children of the Grave”