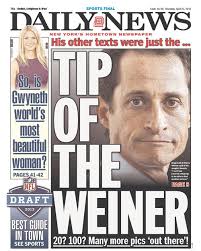 Let’s hear it for disgraced ex-US congressman Anthony Weiner, whose wife, top Hillary Clinton aide Huma Abedin, apparently has had enough of him sending sexually explicit selfies to other women and who recently announced the couple’s separation.  Since 2011 Weiner has been caught in a number of “sexting” scandals, all made juicier by the puerile irony of his last name, but the latest images must have been too much for Ms. Abedin’s patience.  They were, you might say, a flash too far.  Her husband seems to have taken Ted Nugent’s line from “Free For All” rather literally:  “When in doubt, I whip it out…”

All kidding scrunched over to one side, though, the Weiner affair tells us a lot about intimacy and etiquette in the Information Age.  To my knowledge, Weiner was not physically unfaithful to his wife, nor did he make lewd physical advances against female friends.  Lots of married people have engaged in welcome and unwelcome flirting with acquaintances and colleagues, or have spoken crude banter around members of the opposite sex besides their spouse; Weiner just left electronic evidence of doing so.  Like any number of celebrity exposés or political gaffes, the shame arises more from the public revelation of the act, rather than the inherent offense of the act itself.

Now, let’s get this Weiner thing straight:  sharing photographs of your genitals via social networks is not appropriate, especially for elected officials or married fathers of young children.  Anthony Weiner clearly suffers from some kind of exhibitionist tendencies, on top of the more mundane insensitivity he has shown towards his family and his remaining supporters (it’s said he was a dedicated and progressive congressman).  But it’s difficult to think of Weinergate as a sex scandal, when there hasn’t been any real sex involved.  Instead it’s a case of a public person’s crippling addiction impeding his ability to serve as a legislator or as partner to a presidential candidate’s trusted advisor.  Weiner’s addiction, however, is not to “womanizing,” but to technology.

We’ve all seen people who constantly update their Twitter feeds or Facebook accounts with trivial news about meals they just cooked, or people who can’t stop texting even when pushing their toddlers on a swing, or people who spend more time shooting stills and videos of themselves doing stuff than they do experiencing the stuff in undocumented reality.  Perhaps you or I are those people.  Anthony Weiner shares a problem with many of us – an unhealthy attachment to computers and mobile devices that compels him to record and disseminate every little detail of his life, no matter how insignificant, how private, or how improper.  Twenty years ago such compulsions didn’t exist, and Weiner might have been just another guy known but not proven to sometimes make suggestive remarks or gestures to women outside his marriage.  Today, however, our most fleeting and least charming moments can be openly preserved for posterity just by clicking Save and Send.  My final advice for Anthony Weiner:  turn off your phone, dude, and for the love of God, change your last name.