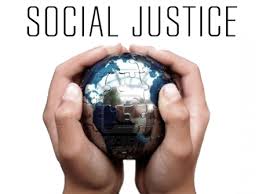 Although the term has been in use for a long time, these days “social justice” seems to be invoked more than ever before.  It’s a concept cherished by progressives and, while given many broad definitions, they all cluster around general ideals of economic security for everyone, equal treatment of diverse populations, and opposition to discrimination. You’ll often hear social justice demanded by anti-poverty, anti-racism, and anti-globalization groups, among many other organizations and individuals; whatever it is, it sounds like something good and right.  Yet in the very popularity of the words, and in the very vagueness of what they represent, are some nagging uncertainties.

For one thing, although some especially passionate advocates are kidded as “social justice warriors,” there are no social justice police and, indeed, no social justice judges, juries, or jails.  In this respect, social justice is analogous to international law – it works fine when there is wide agreement on a particular crime and its appropriate penalty, but in reality such consensus is seldom achieved.  Even with an International Criminal Court and a United Nations, it’s rare that international law is administered with anything like impartiality.  Alleged violators of it will often claim a right to self-defence, and would-be enforcers often hide their own self-interest.  Same with social justice.  Absent a universally recognized system of rules and referees, it remains, for the most part, a subjective aspiration rather than a tangible public service.  And let’s face it, it’s hard enough for us to agree on plain justice, which at least has codified lists of rights and responsibilities, let alone a metaphorical kind that may mean different things to different people.

This leads to another problem of social justice, which is that it can sometimes seem uncomfortably close to mob justice.  Even if we call it something more contemporary like Wikiconstitution or crowdsourced commandments, social justice can mean right and wrong are determined not by sober application of documented statutes but by inarticulate emotions of resentment or envy.   The whole point of traditional, legislated justice is that it has been built up and written down over centuries of precedent and democratic debate – yes, it is slow, dry, and sometimes exasperating to those on the wrong side of it, but once established it has a substance that fleeting instincts never attain.  Social justice, by contrast, attends more to loud grievances and fashionable causes than permanent truths. It can seem valid in the heat of the moment, and it may even remain so long afterwards, but only when it has been incorporated into the formal, legalized standards already on the books.  Other times, the verdict of outraged activists might clash with the verdict of a sitting judge (think of the Jian Ghomeshi case, in which the Canadian broadcast personality was acquitted of sexual assault despite being, by all accounts, a violent weirdo).   Social justice makes little room for fair trials and the presumption of innocence.

Again, the notions that the poor deserve the same basic freedoms as the rich, that we shouldn’t pick on people who are different, and that small communities shouldn’t be overpowered by giant businesses – those all sound sensible.  Yet to call for “social justice” at every instance of somebody, somewhere, not getting what they want out of life, is to suggest that conventional justice still isn’t good enough.  Really?  Suffragettes, Freedom Marchers, and many others sacrificed to change or enforce the laws as they stood, not to appeal to an abstract set of laws that only existed in their minds.  The greatest failing of social justice isn’t that it’s a bad idea, but that an idea is all it is.