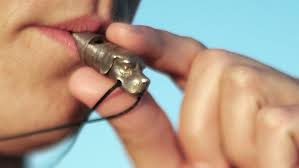 Lately, two terms of commentary we frequently hear are “dog-whistle politics” and “code words.”  The phrases refer to the alleged deployment of innocuous-sounding statements which in fact are meant to rile simmering prejudices:  the implication is that, rather than play directly to crude stereotypes or dangerous emotions, politicians and others will slyly frame their positions with subtle winks and nudges that carry no obvious, indictable offense yet are nonetheless inflammatory.  To be accused of using dog whistles and code words is considered a very serious charge.  Perhaps, though, the charge is itself a kind of evasion.

Richard Nixon’s 1968 victory in the US presidential race has been credited to his promise to restore “law and order,” an invocation which liberals understood to signify a real message of anti-black alarmism.  But the liberals never explained why law and order was so inherently bad, or why only racists and reactionaries would favor it.  In the 2015 Canadian federal election campaign, then-Prime Minister Stephen Harper’s reference to “old-stock” Canadians was taken in some quarters as a subtle anti-immigration quip, yet again, no one could say that some citizens did not in fact have deeper generational roots in the country than others.  At some point, we have to acknowledge that the alleged code-talkers and dog-whistlers are just expressing reasonable positions, rather than masking ugly ideas with polite euphemisms.  How coded do the words have to be, or how high does the dog whistle have to sound, before we admit that the speaker means only what he or she says?

In the 1940s and 50s the same use of symbolic terms and secret signals was perceived in – what a surprise – another end of the political spectrum.  So anyone who called for stronger workplace laws was really pushing the Moscow line, it was said; anyone who marched against racial segregation was really working for the Reds; anyone who listened to folk music was really a closet Commie.  Perhaps some of those people truly were Soviet sympathizers (indeed, a few have been proven to be), but most were simply and sincerely in favor of unions, integration, and the Kingston Trio.  Likewise, someone who today expresses an opposition to hijabs or gay marriage likely isn’t plotting mass incarcerations. We should be able to contest pro-labor or pro-family propositions without dismissing them as mere fronts for some sinister ideology.  Where exactly does seeking popular support end and reckless demagoguery begin?  Who gets to determine the line between moderation and extremism?

We have become so  steeped in the machinations of politics, and so accustomed to pundits and talking heads cynically deconstructing politicians’ every utterance, that we have forgotten the legitimacy of rhetoric as a political tool.  A candidate who pledges to “invest in the future” rather than “raise taxes” is trying to persuade, not to deceive; there is nothing malign about advancing arguable points in effective language.  When Winston Churchill promised, “We shall fight them on the beaches…,” he wasn’t using code words to tell Britons they were in for a long and bloody war, and when Abraham Lincoln began, “Four score and seven years ago…,” he wasn’t playing dog whistle politics to win over the geriatric vote.  But somehow civil communication and measured vocabularies have become objects of suspicion.  And there is something awfully presumptuous in asserting that we can read the evil thoughts of superficially decent orators and their audiences, as if democratic principles of free speech and free conscience only apply to those we already agree with.   “Code words” and “dog-whistle politics” are actually symptoms of the same problem they’re meant to denounce:  the inexorable polarization and distrust of public discourse.