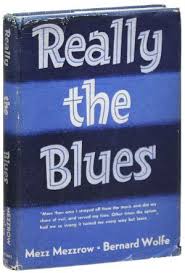 I first heard of Mezz Mezzrow’s 1946 memoir Really The Blues many years ago, when I was, uh, researching some old issues of High Times magazine; the book was referenced in an exclusive interview with a professional “dope taster.”  Now that I’ve finally read Mezzrow’s autobiography, I can appreciate its hallowed place among High Times‘ readers, and among several generations of rebels, music lovers, and amateur dope tasters.  That status is well deserved, for better and for worse.

Really The Blues, co-authored with Bernard Wolfe, recounts Milton “Mezz” Mezzrow’s experiences in the fomenting jazz world of 1920s and 30s Chicago, New York, and Paris.  A saxophone and clarinet player, Mezzrow played and partied with Bix Beiderbecke, Gene Krupa, and Louis Armstrong, as well as numerous less-remembered figures from the era.  Though Jack Kerouac’s On The Road is usually cited as the founding document of the American counterculture, Mezzrow’s work described a similar underground of constant travel, illegal drugs, and social alienation over ten years before the Beat bible’s publication in 1957.  Many passages in Really The Blues mark Mezzrow as a spiritual father of everyone from Miles Davis to Keith Richards:

It looked like my press agent Mr. Grapevine was on the job again for me, and it didn’t hurt my ego none.  I didn’t mind copping a slave just then because I could use the gold, and besides, the kid laid his racket so smooth that I warmed up to him.  His name was Jimmy MacPartland, the cornet player who later became famous for his work on the Chicagoans’ recording of Nobody’s Sweetheart.  This was really my first job with another band, because up to then I always got my own units together, but it made me feel sort of biggity to be hired that way…

A lot of this is very entertaining.  Personal attitudes and verbal styles now indelible parts of North American life can be sourced to Mezzrow’s text – back in my days as a High Times reader, the state of being “mezzed” was frequently sought; now I know where the term comes from.  Really The Blues even comes with a glossary of hip lingo, much of it still current seven decades later.

Mezzrow’s racial views, however, have not aged well.  Though well-meaning and progressive for the time (he lived in Harlem, married and had a child with a black woman, and insisted on being incarcerated with blacks when doing time on a reefer rap), his ardent praise for the music of what he called the Negro, and the Negroes’ indomitable integrity, joy, and rhythmic intuition, cemented longstanding stereotypes which have done more harm than good in the long run.  Despite his genuine sympathy, Mezzrow may have indirectly deprived society of who knows how many African American accountants, engineers, and scientists, by so fetishizing black “soul” in contrast to white intellect (see also Norman Mailer’s 1957 essay “The White Negro”).

Perhaps more damaging is the way Really The Blues romanticized the rootless existence of young, semi-criminal dropouts, endlessly debating the purity of various strains of commercial music (the author loved the original New Orleans jazz and denounced the newfangled bebop) while roaming the smoky demimonde of America.  It’s one thing to acknowledge that such individuals were there, living and thinking differently than most of the population, but it’s another to present their adventures as somehow attractive alternatives to stability and sobriety – Mezzrow admits to becoming an opium addict and makes little mention of a wife and stepson he was clearly neglecting while hanging out with Louis Armstrong and other vipers.  Countless people were inspired by Really The Blues and its literary descendants to retrace the protagonists’ artistic and emotional explorations.  Most survived the journey; a few thrived; we are all probably in a better place because of Mezz Mezzrow.  But not all of his legacy is positive, and there are today plenty of casualties in rehab clinics, homeless shelters, halfway houses, and jails, where they have no doubt discovered what are really the blues.