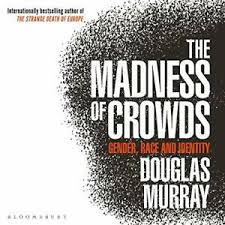 While there are currently many critics naming and shaming the excesses of progressive politics – I’ve done it here – one of the most succinct and effective efforts in this vein is Douglas Murray’s 2019 book The Madness of Crowds:  Gender, Race and Identity.  Murray’s work differs from a lot of competitors partly because he is more inherently sympathetic to liberal ideals than most of the alt-right blowhards taking cheap shots on Fox News and similar platforms, but also because he is less interested in defending tradition than he is in cautioning against the wild rush to overturn it.  This is a smart and necessary line of argument.

Throughout The Madness of Crowds, Murray warns that current orthodoxies of social justice are changing too rapidly to be reasonably applied in the real world; indeed, many erstwhile advocates for feminist, transgender, or anti-racist causes have suddenly found themselves on the wrong side of the fight after they invoked a newly prohibited word or last year’s hierarchy of victimhood.  Our understandings about the nature of sexuality and the differences (if any) between genders and races are far from settled, Murray notes, yet we enforce stern cultural standards, government policies, and clinical programs which assert there can be nothing debatable about them.  Gender dysphoria, intersectionality, and other ideas circulating around the academy and the media offer confused and sometimes contradictory notions of human “hardware” and “software” – e.g. male and female identities are social constructs, but sexual orientation is fixed at birth; people of color are all affected by white racism, but Asian achievement must be handicapped to promote black equality; women should be free to celebrate their desirability, but woe to any men who respond to it, etc. – which are both impractical and dangerous.  In too many areas of human interaction, we are suppressing the instinctive and codifying the unproven.

What’s especially interesting here is that the author, who is gay, can eloquently make the case for same-sex marriage or personal autonomy while alerting us to extremes of rhetoric which undermine those same goals:

We face not just a future of ever-greater atomization, rage and violence, but a future in which the possibility of a backlash against all rights advances – including the good ones – grows more likely.  A future in which racism is responded to with racism, denigration based on gender is responded to with denigration based on gender.  At some stage of humiliation there is simply no reason for majority groups not to play games back that have been played on themselves.

More, Murray sees disturbing tendencies towards an ugly us-versus-them sentiment within progressive politics.  After all, the familiar term “ally,” meaning a friend or supporter of supposedly vulnerable minorities, is borrowed from the language of warfare.  “Just one of the negatives of portraying life as this endless zero-sum game, between different groups vying for oppressed status, is that it robs us of the time and energy for the conversations and thinking that we need to do,” he writes, while pointing out that the politicization of identity makes power, not love or empathy or forgiveness, our central consideration in an equitable society.  Is that to be the deepest meaning of citizenship?  Are there no other social goals worth aspiring to but justice and redress?  Should we define ourselves solely by the rights we want, the rights we’ve been denied, and the rights others don’t deserve?

Murray’s book expends a bit more space than necessary on pop-culture contretemps involving Benedict Cumberbatch, Nicki Minaj, and Drew Barrymore, yet even these usefully illustrate the present condition: “From some of the most famous women on the planet we have heard the demand that women have the right to be sexy without being sexualized.  Some of the most prominent cultural figures in the world have shown us that to oppose racism we must become a bit racist.”  For a brief analysis of an ongoing contemporary crisis – from a democratic standpoint, that is what it is – The Madness of Crowds makes a vital bid to de-escalate.