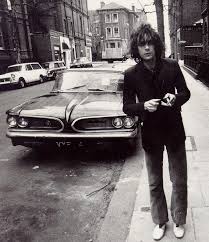 Though I was never a confirmed member, I’m old enough to recall the devoted cult that arose around the reclusive Syd Barrett in the 1970s and 80s.  Barrett, who died in 2006, founded, named, and was the original guitarist for Pink Floyd, and took the band to its first successes in the hippie heyday of 1967-1968, but he was replaced by David Gilmour when he became too unstable to viably perform and record with the act.  For many years after, Floyd fans built a myth of the mysterious “Syd” – the acid casualty and lost genius whose music and life offered tantalizing clues to the limits of drug-inspired creativity.

Barrett is the subject of several biographies, among them Julian Palacios’ Syd Barrett and Pink Floyd:  Dark Globe (2010), an exhaustive and sympathetic study of both the man and the English counterculture of his era.  Palacios upholds the genius legend, concluding that Barrett’s “revolutionary chromatic improvisations scratched the surface of a potentially new school of music,” while tracing the intersections of students, artists, entrepreneurs, dropouts and druggies who comprised Pink Floyd and its earliest audiences; the story sometimes reads like a musical Withnail and I.  Palacios has written a poignant book, but I haven’t joined the cult of Syd.

Much of what fans hear as Barrett’s musical originality sounds to me like mere amateurishness.  Whereas other psychedelic superstars – John Lennon and Jimi Hendrix come quickly to mind – had previously mastered the crafts of songwriting and guitar playing, Barrett was a beginner when he came out with “Arnold Layne,” “See Emily Play,” and “Interstellar Overdrive.”  There is certainly whimsy, experimentation, and a unique Englishness in his material, but there’s also a pretty limited tweeness to it that the post-Barrett Floyd matured out of (for my money, I’d say Marc Bolan and T. Rex did the tripped-out Albion fairy tale thing more enjoyably than Barrett). Palacios detects Coltrane-like virtuosity in the songs of a curious, somewhat dilettantish young man who was in fact still learning his instrument and his medium.

Of more interest to me is Barrett’s reputation as a victim of LSD. Palacios gathers extensive testimony to show that, while Syd definitely took more trips than he should have, he was also affected by his deep ambivalence toward the modest fame he found in Pink Floyd, as well as overindulgence in the powerful depressant Mandrax (methaqualone) and even repeated exposure to the strobe lights which were prominent in early Floyd gigs. Contrary to his followers’ fantasies, Barrett became neither a catatonic vegetable nor a raving madman:  he lived out his final decades as a local eccentric in his home city of Cambridge – frail, shy, and very quirky, but still able to paint, garden, and read for his own pleasure.  Those who admired him as a lysergic voyager stunned into insanity by cosmic insights gained while tripping missed the mundane truth that Barrett probably suffered from an ordinary mental illness.

Indeed, it may be that the spacey weirdness celebrated in users of psychedelics is a misapprehension of an underlying psychological affliction.  I can attest that, in my cohort, the heaviest drug experimentation occurred over late adolescence and early adulthood, coincidentally the same years when symptoms of schizophrenia and obsessive-compulsive disorder arise, especially in males. Acid and cannabis are more a complement to, rather than a cause of, Barrett-esque behavior, and many supposedly “blown minds” could well have been on their way to getting blown without illicit chemicals.  In other words, taking a lot of LSD might fry your brain, but you’d have to be already fried to want to take a lot of LSD.  Rather than romanticizing Syd Barrett as a hallucinogenic hero, perhaps we should remember him as a cautionary example of the dangers that come from confusing the drive to self-medicate with the effects of the medication itself. Shine on, you crazy diamonds.

2 thoughts on “Syd and Cid”