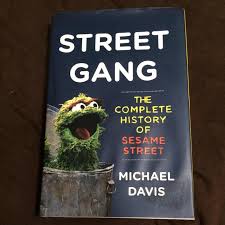 Like most middle-aged North Americans, my formative years were influenced by Sesame Street.  As a preschooler I faithfully watched Bert and Ernie, Susan, Gordon, and Mr. Hooper, was taught that people and monsters of all backgrounds could get along regardless of skin or fur color, and still can hardly speak the word “phenomena” without adding “Beep-bee-dee-beedee.”  Along with millions of other kids, I televisually and mentally got to Sesame Street just when I was becoming a person and a citizen.

But the validity of the show’s educational agenda was largely taken for granted by viewers and their parents in the 1970s, and Michael Davis’ 2008 book Street Gang:  The Complete History of Sesame Street goes some way to detailing just how politicized its producers at the Children’s Television Workshop were.  Sesame Street‘s messages of multicultural harmony, urban funk, and literacy-as-entertainment were the deliberate efforts of an almost comically stereotypical group of New York and Ivy League progressives; the decisions to set the PBS program around a downtown apartment building and to cast a mix of black, white, and Hispanic performers reflected the Manhattan-based Great Society idealism held by virtually everyone involved in putting it on the air:  radical chic with sippy cups.

Decades later, it’s hard to find fault with what producer Joan Ganz Cooney, composer Joe Raposo, director Jon Stone, head writer Jeff Moss, and Muppet master Jim Henson were trying to convey.  Lessons in reading and counting don’t have to be humorlessly drilled into little minds; friendship and joy can cross ethnic boundaries; underprivileged children deserve loving communities and positive role models, just as suburban kids do. It could well be that contemporary Americans are more accepting of black culture and black public figures because Sesame Street brought a healthy diversity into homes that hadn’t previously seen much of it.  Yet the story of Sesame Street also lends itself to caricatures of PC liberal elitists forcing tolerance and inclusion down the public throat (while on the public dime) – Davis recounts the sad tale of the series’ Northern Calloway, who played likable “David” for several years, despite mental and drug issues that once drove him to brutally beat a female victim with a tire iron while on a cocaine bender.  One of these things just doesn’t belong, someone might have said.

For all of Sesame Street‘s good intentions and genuine charm, then, it was as much “biased media” as anything financed by Rupert Murdoch or the Koch brothers. There’s also continued doubt over whether children really learn anything by gazing at colorful TV (and now, computer) screens for hours on end, besides how dazzling screens themselves are to young eyes and brains.  And with today’s United States rent by seemingly intractable social, economic, and racial divides, the show’s optimistic mandate seems to have come from a very different historical place, where sunny days, with enough grants and focus groups behind them, would surely sweep the clouds away.