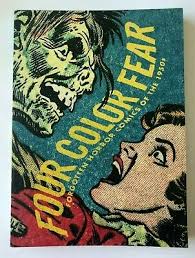 Individually, some entries of the anthology Four Color Fear:  Forgotten Horror Comics of the 1950s might stand as worthy examples of sequential art and fantasy fiction.  Among the illustrators of this collection are esteemed talents including Joe Kubert, Wally Wood, and Frank Frazetta, all at the promising outset of their careers, and a few stories – “Colorama,” “The Thing From the Sea,” “The Maze Master” – are remarkably surrealistic, even subversive, for the era.  But, like so much mass culture, the sheer volume of similar material churned out by the comics industry, preserved here and elsewhere, detracts from the occasional originality of any single piece.  Four Color Fear is a reverent archive of what was intended to be, and largely remains, a disposable medium.

The history of horror comics in the Eisenhower decade has been well told in David Hajdu’s The Ten-Cent Plague:  The Great Comic Scare and How It Changed America (2008), but there are numerous books which reprint the comics themselves; my own tastes in the field run to 1970s lines like Ghosts, The Unexpected, Weird War Tales, and Creepy.   A cover gallery in Four Color Fear demonstrates how many titles were issued during the period, and how derivative of each other they were:  Weird Mysteries, Mister Mystery, Weird Horrors, Strange Terrors, Weird Tales of Terror, Weird Adventures, Terror Tales, Ghostly Weird Stories, Haunted Thrills, etc.   The assembly-line process necessitated by this number of publications, divided among writers, story editors, pencil renderers, inkers, colorists, and letterers, recalls the ersatz entertainment offered in Orwell’s Nineteen Eighty-Four:  the rebel Julia operates a novel-writing machine in the Pornosec of the Ministry of Truth’s Fiction Department.  “She could describe the whole process of composing a novel, from the general directive issued by the Planning Committee down to the final touching-up by the Rewrite Squad…’They only have six plots, but they swap them round a bit,'” Julia tells Winston.

Comic books epitomized the industrialization of art dreaded by Orwell, and by social critics like Theodor Adorno and Dwight Macdonald, who saw only banal stories and pictures commissioned by sleazy businesses and mechanically marketed to undiscriminating consumers.  Even more generous takes on the genre, like the Pop art of Roy Lichtenstein, simply reproduced comic panels without crediting original sources, on the assumption that they were generic designs attributable to no individual creator. Comics were made to be purchased and replaced in an indefinite cycle of turnover, whereby adherence to standardized visual and plot templates was valued far above innovation and inspiration.  Indeed, the annotations in Four Color Fear, by John Benson and Greg Sadowski, confirm that the usual production imperative of comic craftsmen amounted to something like, “They didn’t want it good – they wanted it Tuesday.” That approach applied in other media as well.

Across Hollywood, pop music, illustration, and pulp fiction, the commercial comic book aesthetic was duplicated – with rare exceptions.  For every Orson Welles or Alfred Hitchcock there were fifty B-serials; for every Ellington or Elvis there were a hundred forgotten jukebox 45s; for every gorgeous Varga or Petty girl there were a thousand anonymous pin-ups; for every Dashiell Hammett or H.P. Lovecraft there were ten thousand hacks.  Likewise, for every striking comic story there were many routine versions of monsters, twisted revenges, and screaming damsels repeated monthly.  Of course, there’s nothing to stop us enjoying any of this stuff, regardless of its cynical origins or intended purposes.  We are better for recognizing the brilliance in popular culture, such as there has been, and incorporating its best work into our pantheon of enduring genius.  But compilations like Four Color Fear, where the formulae are made obvious page after page, variation after variation, chill after chill, terror after terror, may not be the best way to make that case.