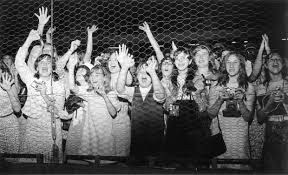 One of the most notorious entries in the canon of Beatles literature is the British commentator Paul Johnson’s New Statesman essay of February 28, 1964, “The Menace of Beatlism.”  Quoted in a number of music histories (including my own Out of Our Heads) and anthologized in The Faber Book of Pop and Read the Beatles, Johnson’s critique is still posted on the New Statesman website, which notes that the article “is the most complained-about piece in the Statesman’s history.”  He called the Fab Four an “apotheosis of inanity…[a] mass-produced mental opiate,” and has been persona non grata at Strawberry Fields and Penny Lane ever since.

It’s easy to read “The Menace of Beatlism” as an egregious example of a cultural critic getting it very wrong in a very big way.   The Beatles ended up as Twentieth Century icons; the two surviving members are knighted; their music is known around the world; who doesn’t love the Beatles?  Johnson was thirty-five when he wrote and has since become a prolific conservative historian, and his New Statesman diatribe was likely intended as an incidental, not entirely serious harrumph about British politics (a national election was scheduled for later that year), rather than a considered musicological analysis.  Nearly sixty years later, though, it’s possible to appreciate the writer’s social prescience even as we scorn his aesthetic judgement.

“The Menace of Beatlism” didn’t really have much to say about the Beatles’ songs or the personal character of the Beatles themselves.  Johnson was instead getting at the opportunism and cynicism by which people of his own generation were attaching themselves to the Beatles, all to court (and then exploit) a growing movement of youth and novelty.  The actual Beatles were not the problem, he said; it was Beatlism, the self-sustaining loop of celebrity, marketing, and calculated identification with plebeian style which concerned him.  His dig at jazz, admittedly, has a whiff of racism about it (he cited “the monotonous braying of savage instruments”), but his broader argument – that pop stars were not the same as classical composers, and shouldn’t distract impressionable audiences from the best of their cultural heritage – is harder to refute.

The classic rock music of which the Beatles were the leading exponents was a cottage craft practiced on an international assembly line.  Paul Johnson was not interested in the craft, to his discredit, but at least he noticed the assembly line.  In this he was in company with a lot of highbrows from diverse political backgrounds:  leftists saw pop culture as a capitalist ploy to pacify the masses, while those on the right saw the same material as an egalitarian conspiracy lowering public taste to that of the rabble.  In his 1960 book Masscult and Midcult, Dwight Macdonald sniffed without irony, “…the separation of Folk Art and High Culture in fairly watertight compartments corresponded to the sharp line once drawn between the common people and the aristocracy.  The blurring of this line, however desirable politically, has had unfortunate results culturally.”

Of course the Beatles were far more original, and far better, than the manufactured idols perceived by the likes of Johnson and Macdonald, but it took a certain independence of mind to even raise the objection.  As John Lennon himself later acknowledged, “They hyped the kids and the generation…Everybody wants to keep on the bandwagon…Who was going to knock us when there’s a million pounds to be made?”  Today no media commentator would dream about assessing, say, Drake or Shang-Chi with anything less than respectful admiration – if it’s getting a lot of attention, it must be important, and if it’s surrounded by a lot of publicity, it must be good.  Yet the same people complained bitterly when an oafish TV star was elevated to America’s highest office and degraded civic discourse with his attention-seeking publicity stunts.  They couldn’t see the connection between the ingratiating, can’t-afford-to-miss-out coverage of professional entertainers and the deterioration of democracy.  Paul Johnson could.