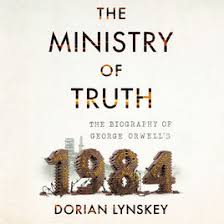 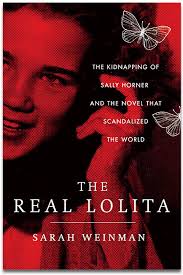 If you were to somehow create one textual mashup from two of the Twentieth Century’s greatest novels, you might begin like this:  “Julia, light of my life, fire of my loins…Joo.  Lee.  Ah.”  The novels are, of course, George Orwell’s Nineteen Eighty-Four (1949) and Vladimir Nabokov’s Lolita (1955), each the subject of recent books which track their most distant origins to their most contemporary resonances:  Dorian Lynskey’s The Ministry of Truth and Sarah Weinman’s The Real Lolita.  Both studies put old classics into compelling new perspectives, suggesting not so much the eternal timelessness of their ideas as our eternally malleable interpretations of the stories underlying them.  As each generation has its Hamlet or its Superman, so, perhaps, will each generation find its own Winston Smith and its own Dolores Haze.

The Ministry of Truth is certainly an accessible account of Orwell’s life and work, invoking the “alternative facts” of Kellyanne Conway and Karl Rove’s alleged dismissal of “the reality-based community” to bring Nineteen Eighty-Four dismayingly up to date.  Whereas earlier readerships found in the dystopia an indictment of any kind of totalitarianism (in the 1950s and 60s), then a caution against surveillance and intrusive media (from the 1970s to post-9/11 politics), Lynskey now credits the novel as a prophetic defence of objective truth in a polarized, information-siloed society.  Shaped by the good and bad visions of H.G. Wells, Jack London’s The Iron Heel, Arthur Koestler’s Darkness At Noon, Aldous Huxley’s Brave New World, and Yevgeny Zamyatin’s We, and shaken by the rapidly shifting allegiances and blatantly deceitful propaganda he’d witnessed firsthand during the Spanish Civil War, Orwell advocated for “the right to print what one believes to be true, without having to fear bullying or black mail from any side.”  This right is not exactly under threat today, at least in the West, but Lynskey notes that “the effectiveness of the fake news that Winston manufactures at the Ministry of Truth depends on its readers’ ignorance, laziness, and prejudice as much as it does on state power.”  The Ministry of Truth does not reference Mark Crispin Miller’s 1984 remark that “Big Brother is You, Watching” – its analysis, however, shows how that reading is still all too pertinent.

The Real Lolita, meanwhile, rethinks Nabokov’s fiction in the #Me Too era, examining an authentic 1948 case of abduction and sexual abuse and its scarcely acknowledged role in inspiring the tale of Humbert Humbert and his titular victim.  Author Weinman has written elsewhere about crime, and besides the sad account of Frank La Salle and Sally Horner her book also offers a gallery of other real-life rapes and murders from the same period, showing that our modern obsession with every kind of erotic experience and representation thereof, for all its excesses, may be an improvement on the repression and ignorance of seven decades ago.  Though Weinman diligently uncovers evidence that Nabokov was thinking of the episode when conceiving Lolita – the kidnapping, rescue, and subsequent trial made headlines – she hews to a received orthodoxy of predators and prey that makes little distinction between living people and the tragic characters on whom they were loosely based.  La Salle was no cosmopolitan professor, and he had no prior relationship with Sally’s single mother; there are odd gaps and loose ends in the pair’s cross-country odyssey (a mysterious woman briefly accompanied them, and numerous bystanders interacted with what they assumed to be an ordinary parent and child); convicted and jailed afterward, La Salle insisted he was Sally’s father, and sent flowers to her funeral after she perished in a teenage car crash.

To me, the central poignancy of Lolita is that Humbert is intellectually the superior of the other personalities in the narrative, but morally by far their inferior; his illicit desires are more deeply felt and finely expressed than the banal proprieties spoken and acted by those around him.  But to Weinman, “If you’re not being careful, you lose sight of the fact that Humbert raped a twelve-year-old child repeatedly over the course of nearly two years, and got away with it.”  Betraying another bias, she observes that Sally’s “relationship with Frank La Salle was the opposite of natural. It was against nature.  It was wrong” – but makes no such judgement on the closeted gay man who committed a murderous shooting spree in Sally’s New Jersey home town in 1949.  Sally Horner unquestionably suffered what no eleven-year-old girl should ever undergo, yet to claim her, and by implication denounce Vladimir Nabokov, on behalf of today’s wokeness seems like one final exploitation of her short life.

There may thus be a limit on how much current relevance one can detect in novels created in different eras for different cultures:  finding nuggets of theme or language that apply to our own time is not the same as picking over a masterpiece to bolster an agenda that’s lately fashionable.  Yet both The Ministry of Truth and The Real Lolita do succeed in demonstrating just how deep are the meanings to be mined from Orwell’s and Nabokov’s imaginings, and how forceful were the realities which prompted them.  Another opening for our pretend mashup:  “It was a bright cold day in April, and the girl was not yet thirteen.”